Clue: It was a dark and stormy night 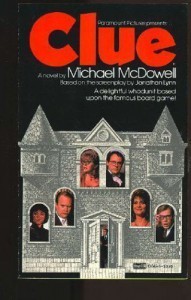 Going into this, I had a faint feeling of dread. The book was either going to be so bad, it would ruin the movie for me, or so good, it would ruin the movie for me. This novelization nailed it. I don't think I've ever read a movie novelization that so perfectly captured the movie. Some of the humor didn't quite carry over; it's kind of hard to capture the visual aspect of Wadsworth's explanations at the end, but it did a decent job of it. I really only have the one complaint and that is the fourth ending; it was pretty awful. I'm actually glad it was left out of the movie because it was so over the top and cliche and the tone of it was just jarring compared to the other three.